Viewpoint Diversity in the Academy

Truth is a process, not just an end-state. The Righteous Mind was about the obstacles to that process, such as confirmation bias, motivated reasoning, tribalism, and the worship of sacred values. Given the many ways that our moral psychology warps our reasoning, it’s a wonder we’ve gotten as far as we have, as a species. That’s what’s so brilliant about science: it is a way of putting people together so that they challenge each other and cancel out each others’ confirmation biases and tribal commitments. The truth emerges from the interaction of flawed individuals. 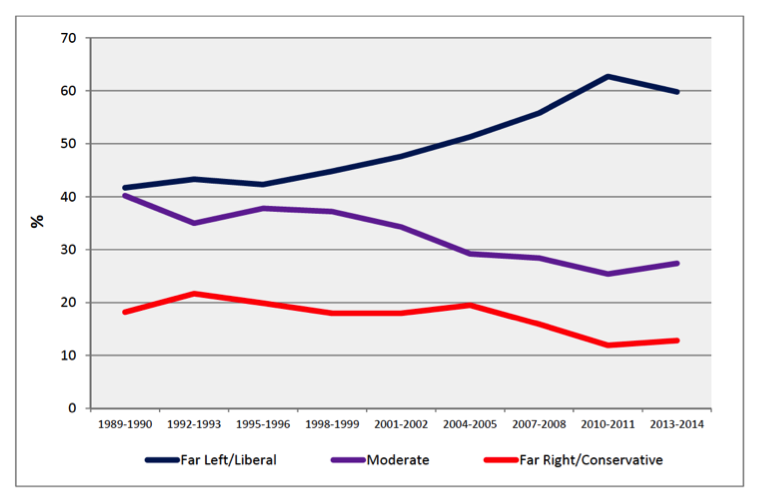 Data from Higher Education Research Institute, based on a survey of college faculty conducted every other year since 1989. Plotted by Sam Abrams.

Nowadays there are no conservatives or libertarians in most academic departments in the humanities and social sciences. (See Langbert, Quain, & Klein, 2016 for more recent findings on research universities; and see Langbert 2018 for similar findings in liberal arts colleges.) When everyone shares the same politics and prejudices, the disconfirmation process breaks down. Political orthodoxy is particularly dangerous for the social sciences, which grapple with so many controversial topics (such as gender, race, poverty, inequality, immigration, and politics). America needs innovative and trustworthy research on all these topics, but can a social science that lacks viewpoint diversity produce reliable findings?

What I am trying to do

I am a non-partisan centrist, and I am very concerned about the loss of viewpoint diversity in the academy. I believe the problem is amplified by the rising political polarization of the United States more generally. I therefore teamed up with two dozen professors in psychology and other disciplines to create the site HeterodoxAcademy.org. Our goal is to make the case, consistently and forcefully, that the academy must increase viewpoint diversity in order to function effectively. We launched the site in September 2015.

A) If you want to understand the cultural transformation that has occurred at American universities since the 1990s  here is a list of my writings on the subject, augmented by some of the best essays by others:

1) The Coddling of the American Mind (2015, With Greg Lukianoff, in The Atlantic). This essay gives an overview of the new culture spreading across universities, in which a subset of students demand “safe spaces,” “trigger warnings,” and administrative mechanisms for cataloguing and punishing “micro-aggresssions.” We explain where this culture came from and why it is bad for the students’ own mental health, as well as being devastating to the free exchange of ideas upon which the pursuit of truth depends. In 2017 I followed up this line of argument in an essay co-written with Lenore Skenazy that showed how paranoid parenting and the loss of unsupervised play in childhood has created a fragile generation of kids that is receptive to the new safety culture. We show how this new culture may be making kids “too safe to succeed”

2) Where microaggressions really come from. (2015) This is my summary of an extraordinary essay by sociologists Bradley Campbell and Jason Manning. They show how a new “culture of victimhood” is emerging on America’s most progressive college campuses in which the main paths to gaining prestige are either to advertise one’s victimhood or to attack others in the name of defending victims. This culture weakens students and guarantees unending strife.

3) True diversity requires generosity of spirit (2015). This is a case study of one of the most egregious witch-hunts so far — the persecution of dean Spellman at Claremont McKenna, for the crime of writing a helpful email with one ambiguous word. I say why current diversity approaches should be reconfigured around the principle of charity — we must give each other the benefit of the doubt if we are to reap the benefits of diversity.

4) How Marcuse made today’s students less tolerant than their parents (2015). by April Kelly-Woessner. Describes the resurgence of influence of Herbert Marcuse, who argued in the 1960s that true “liberating” tolerance requires suppressing all non-progressive voices. Kelly-Woessner shows the big split in American opinion on matters of free speech: Millennials embrace Marcusian ideals much more than did previous generations, and it is this moralistic illiberalism that leads to the witch-hunts and ultimatums that are sweeping across American college campuses since Halloween 2015. (Two months after Kelly-Woessner posted the essay, Pew research published strong confirmation of her argument: 40% of Millennials OK with limiting speech offensive to minorities).

5) The Yale problem begins in high school (2015). This is a report of a strange experience that happened to me when I gave a talk at a progressive private high school. I came to see that “the Yale problem” — the angry demands for changes that will make future generations even angrier — has its roots in high school. Many students at elite schools are learning to judge ideas not by their content but by the “privilege” or victimhood of the speaker. They arrive at Yale (and other colleges) unready to participate in a marketplace of ideas because they want adult authorities to ban many sellers from the marketplace before they deem it safe to enter. (This mentality is not found in most students, but those that hold it tend to have outsized influence on administrators who want to avoid controversy.)

6) How concept creep is closing down minds (2016). This is an essay I wrote with Nick Haslam in The Guardian (UK) explaining Haslam’s academic paper on “concept creep.” The campus trend to lower the bar on concepts useful for extending victimhood culture (e.g., bullying & trauma) may end up making students more fragile and depriving them of challenges to their favored ideas. For a condensed version of Haslam’s paper click here.

7) Intimidation is the new normal on campus. In 2017, in the wake of the election of Donald Trump, passions grew stronger and we began to see actual physical violence on campus as a response to speakers deemed unacceptable. The violence at UC Berkeley and at Middlebury was a wakeup call to many professors, and we saw a sharp rise in applications to join Heterodox Academy. In this essay in the Chronicle of Higher Education I explored the causes and implications of these trends. Even though actual violence is still rare, the fact that a non-orthodox speaker might draw a protest crowd, and the protest crowd might contain members of antifa (including some students) means that anyone who challenges the political consensus on campus must now at least think about issues of physical safety and be worried if a crowd of students approaches. It gets worse. As physical intimidation from students on the political left was increasing ON campus, threats of violence from the political right OFF campus were becoming much more common too, with death threats and racist slurs aimed at professors who said something provocative (and sometimes outrageous) that got picked up and sometimes distorted by right-wing media. I explained the causes and consequences of this alarming new development in a blog post at HxA titled Professors must now fear intimidation from both sides.

8) Are words violence? The second most unfortunate trend on campus in 2017, after the rise of actual violence, was the rapid spread of the idea that words are violence (and therefore, violence to stop people from speaking is justified self defense). An op-ed in the New York Times, by a psychologist I like and admire, tried to ground this argument on neuroscience: words can cause stress, stress can cause physical damage, therefore words can be violence. I thought the essay made some logical errors (words can cause physical harm, but that doesn’t mean that they are violent) and some psychological errors (such as misunderstanding antifragility, and recommending policies that would make students more fragile). I showed why the op-ed was wrong and harmful (but not violent) in an essay in The Atlantic, with Greg Lukianoff: Why its a bad idea to tell students words are violence.

B) If you want to understand the changes that have occurred in the social sciences, and how the loss of viewpoint diversity can sometimes damage the validity of the research, here is my suggested reading list:

1) Read our welcome letter at HeterodoxAcademy.org. Then explore the site. A few key postings are…

2) Political diversity will improve social psychological science. This is a condensed version of the paper I wrote with 5 colleagues documenting the loss of viewpoint diversity in social psychology, and the problems that has caused.

3) The Backstory of the AEI-Brookings Poverty Report.  This essay shows the value of viewpoint diversity. It’s about how a deliberate decision to cultivate viewpoint diversity led to a breakthrough report on poverty, drawing on the best ideas from both sides.

C) If you want to read criticisms of me and my colleagues at Heterodox Academy, here are the major ones. (It’s really strange… there are occasional slurs but hardly any arguments have been offered against us.)

1) Kate Manne, Why I use trigger warnings. NYT. (my response is here)

3) Paul Krugman, Academics and Politics. NYT. (my response is here)

4) Jeffrey A. Sachs and Matt Yglesias each argued that there is no free speech crisis on campus, it’s just a moral panic. My response is here (with Sean Stevens).

D) If you want to DO something about the problem, and you teach or work at a university, college, or high school, consider assigning any of these resources to all students, in order to help them understand that truth is a process all-too-easily subverted by normal moral psychology:

1) The Righteous Mind: Why good people are divided by politics and religion. (See here for why its a great book for a common read, relevant in many courses and departments)

2) The OpenMind Platform: A fun and powerful educational technology system that prepares students to benefit from viewpoint diversity.

3) All Minus One: John Stuart Mill’s Ideas on Free Speech, Illustrated A free ebook (or $3 Kindle book) to bring the best arguments ever made for free speech from the 19th century to the 21st century.

4) The Coddling of the American Mind: How Good Intentions and Bad Ideas Are Setting Up a Generation for Failure.

E) Here are the major talks I have given on viewpoint diversity.

F) Here are some additional essays I have written on the topic: