Kids In Space: Why Teen Mental Health is Collapsing

My goal is to answer the question: What happened to Gen Z? Why did their levels of anxiety and depression skyrocket around 2012? 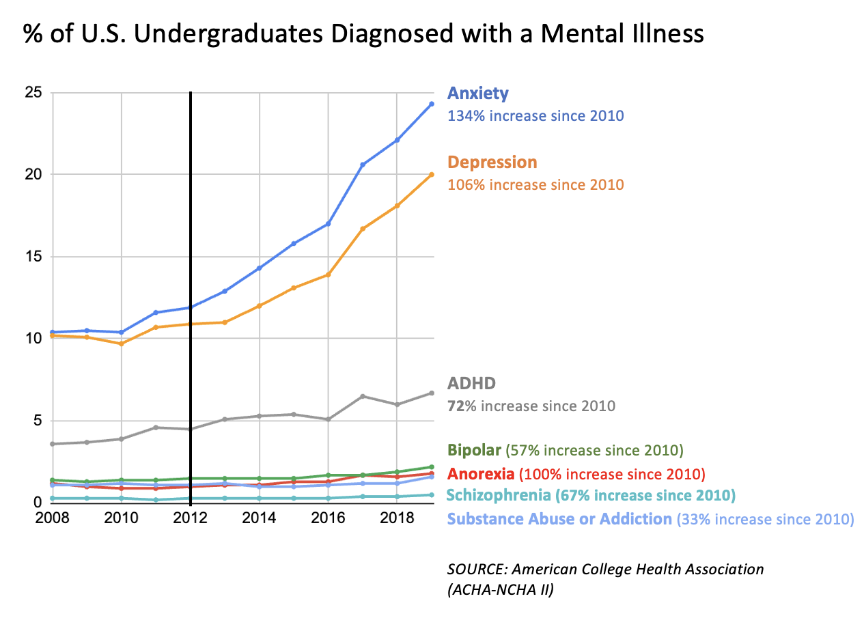 In the summer of 2022 I was working on a large book project — Life After Babel: Adapting to a world we can no longer share, which is about how social media rewired societies in the 2010s in ways that are incompatible with liberal democracy. I was going to start that book off with one chapter on what social media did to kids, since they were the “canaries in the coal mine.” They moved their social lives onto social media platforms on their new smartphones around 2010-2012 and immediately became more anxious and depressed. Then I was going to move on and show what happened to liberal democracies a few years later. But to tell the story of teen mental health in one chapter was not possible, and by the time it grew into four chapters, I realized that this had to become a book of its own. So Kids In Space is Volume 1, in a sense, of the larger Babel project.

Splitting the book this way allows me to address two different but overlapping audiences. Kids In Space will build directly on my last book, The Coddling of the American Mind (with Greg Lukianoff). It’s directed first and foremost to parents, teachers, professors, and all who work with children, teens, and young adults. It’s about what we’ve done to Gen Z, and how to stop doing it and restore healthy childhood. The primary prescription: 1) more unsupervised time to play and explore (before puberty), in order to learn to become self-governing; and 2) less and later access (after puberty) to social media and the screen-based life. Kids In Space will be published by Penguin Press in January 2024.

Life After Babel will build on all three of my earlier books but especially on The Righteous Mind, which was about how moral psychology created the possibility of large, diverse, peaceful societies. I’ll show how the rapid conversion of “social networking sites” into “social media platforms,” which took place from 2009 to 2013, rewired society in ways that have made liberal democracy unsustainable. (I offered a preview of the first few chapters of the book in a 2022 Atlantic essay titled Why the Past 10 Years of American Life have been Uniquely Stupid.)  I believe America and other liberal democracies are headed for extraordinary instability and potential failure, unless we can radically reform social media and strengthen our democratic and epistemic (knowledge-generating) institutions. Life After Babel will be published by Penguin Press in 2025.

Kids In Space begins with a deep dive into the statistics on teen mental health, which I have been aggregating since 2019, along with a review of the evidence that the epidemic was caused (in large part) by the move of teen social life onto social media platforms in the early 2010s. I then explore how healthy development works in children and teens, and I explain why social media blocks healthy development. The story is somewhat different for girls and boys. In the last six short chapters I show what parents, schools, universities, employers, governments, and teens themselves can do to reverse the epidemic and raise healthier children.