My colleagues and I developed Moral Foundations Theory to understand differences between cultures, but early on we noticed that it was helpful for understanding the different moral “matrices” of left and right within each nation. You can see our empirical and theoretical publications here. Our main academic review paper is here.

As political polarization increased rapidly in the USA during the Bush and Obama years, I turned my attention from basic research to applied, asking: How can moral psychology help us understand the forces making American democracy so dysfunctional? And how can moral psychology help citizens understand each other across the political divide? Those were my two main goals in The Righteous Mind.

While writing that book I stepped out of the progressive moral matrix I had lived in since high school and became a committed centrist: I came to believe that each side, each political movement, understands some social processes and moral truths very well, but goes blind to others. I came to believe that partisanship of any kind causes motivated reasoning in social scientists, just as in all other human beings. I began to grow concerned about the quality of social science research, given the increasing homogeneity of political beliefs in all social sciences (with the exception of economics, in which the Democrat-to-Republican ratio is merely 4 to 1).

I co-founded several projects to apply moral psychology, including CivilPolitics.org (with Ravi Iyer and Matt Motyl) and AsteroidsClub.org (with Liz Joyner). See also the report of the AEI-Brookings Working Group on Poverty and Opportunity, which provides a model for doing evidence-based public policy in a politically polarized time.

I was working on these problems for several years when the rate of change began accelerating in 2015. There were moral meltdowns on university campuses and populist rebellions across Europe and the USA. Faith in Democracy is waning rapidly. Illiberal movements on the right (such as the Alt-right) and the left (such as identity politics and “safety culture“) are gaining strength and ramping each other up, hyper-activating  the tribal psychology that I described in The Righteous Mind. I am extremely alarmed. Peaceful and open multi-ethnic democracies are wondrous creations, given our tribal heritage, and two bands of arsonists (the extremists) are flinging matches at them all across the Western world, while the more reasonable majorities on each side just point their finger at the extremists on the other side, and everyone is immersed in a river of outrage-inducing news, not all of it real (for left or right), courtesy of social media and its mobocratic algorithms.

So this is what I’m working on in 2016 and 2017: 1) repairing the intellectual climate in universities via the collaboration at HeterodoxAcademy.org, 2) writing a book on capitalism, morality, and democracy, 3) using moral psychology to improve business ethics, and 4) writing a book with Greg Lukianoff on how universities came to teach bad thinking, which is making education, workplaces, and democracy so much more dysfunctional.

My major essays and talks on political psychology, polarization, and populism

If you are interested in current events and want to read or watch just one or two things, choose from among those preceded by **

In 2015 and 2016 I wrote a series of 3 essays that tell a coherent and cumulative story about how capitalism set in motion a series of economic and psychological changes that led to today’s battle between “globalists” and “nationalists.” It is not a coincidence that similar conflicts are playing out in diverse nations.

1) How Capitalism Changes Conscience (Center for Humans and Nature, 2015)
2) ** When and Why Nationalism Beats Globalism (The American Interest, July 2016)
3) The ethics of globalism, nationalism, and patriotism (Sept. 2016)

4) Donald Trump supporters think about morality differently than other voters. Here’s how. (Vox, with Emily Ekins, Feb. 2016). An analysis of the moral foundations of voters in the US Presidential primaries.

5) Audio of my conversation with Nick Clegg, “The rise of populism and the backlash against the elites”. At Intelligence Squared, London, Nov. 2016.

C) On how to forgive, co-exist, and get along despite political polarization and animosity

1) We need a little fear. (New York Times, Nov. 2012). My attempt to encourage cross partisan understanding in the wake of the 2012 Presidential election. The “asteroids” idea presented there led to… 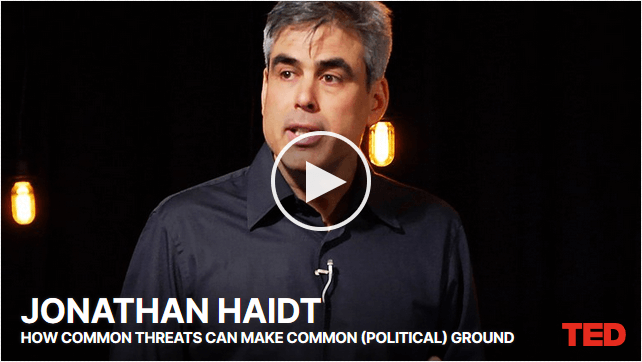 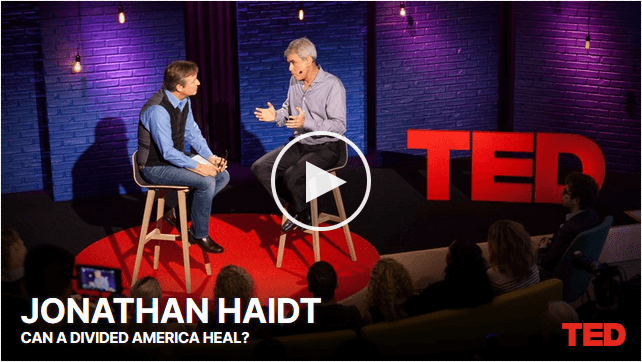 D) On political polarization and rising illiberalism in American universities

See my page on Viewpoint Diversity in the Academy, especially my ** Lecture at Duke University, on Why universities must choose one telos — Truth or Social Justice.

E) On identity politics–which I believe is fundamentally incompatible with success and progress in multi-ethnic democracies. I have not yet written on this topic, but here are some essays (and one rant) that I find deeply insightful:

1) Jonathan Pie: Rant from a British comedian on how identity politics triggered the backlash that got Trump elected.

F) Here are some other lectures I’ve given on political psychology and polarization: